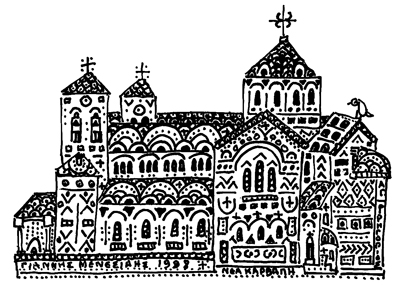 Byzantine historians regarding Thassos in that period of time. The Christian religion was made known to the island in 52 AD, when Apostle Paul traveled from Troy (Asia Minor today) to Neapolis (Kavala today).

The beginning of the Byzantine period concurs with the end of the state of Thassos and the Thassian civilization. There are incomplete, ambiguous and little information by the The spread of Christianity was fast, however the authorities in Thassos tried to not to reveal and displease Rome and its pagan religion. During the early Byzantine years, Thassos flourished and beautiful churches were built.

However, it was in the same century that the first invasions took place, striking from north, west and east. The Avars were the first who occupied Thassos, during the reign of Justinian and stayed until 600 AD when Herakleios took it back. In 765 AD, Slav pirates invaded in the island and expelled most of the inhabitants. The Byzantine emperor Constantine Copronymus, know from his involvement in the Iconomachy, unable to recapture the island tried to negotiate with the pirates. In 904 AD the Saracens arrived in Thassos, after they occupied Crete and destroyed Thessalonica. They built ships and siege engines, while they transported many of its inhabitants in Candia in Crete (today’s Herakleion) where they were sold as slaves. In 961 AD, Thassos belongs ones again to the Byzantine state as part of the theme of Thrace, until 1204 AD. On this year, Thassos was given to Tnrico Dandolo, doge of Venice. The Venetians built a palace on the acropolis, reconstructed the city wall according to the needs of the that time and built large towers in various places of he city, the ruins of which can been seen to this day.

Thassos joins once more the Byzantine state in 1261 AD, after the reoccupation of Constantinople by Michael Palaiologos. In 1306 AD, the island was under the rule of Tidedias Zacharias, while in the beginning of 13th century, it was occupated by the knights of St John and later by the Venetians, Spaniards and other raiders. In 1315 AD, Andronicus II tried to take the island away from the Catalans but he failed. By the end of the Byzantine period and until 1455 AD, Thassos remained under the occupation of the Gatelouzzi family, until it was taken over by the Turks.

More in this category: « Frankish and Venetian rule Classic Era »
back to top
FaLang translation system by Faboba

(Κατηγορία: Πληροφορίες)
In the island there are places of natural beauty and historical value that you can visit during your stay....
...Περισσότερα

(Κατηγορία: Ιστορία)
In 1813, the Sultan gave Thassos to the viceroy of Egypt Muhammad Ali, as a reward. The viceroy was good to the people o...
...Περισσότερα

(Κατηγορία: Τα χωριά μας)
Thimonia is a hamlet situated to the southeast part of the island. It belongs to the precinct of Theologos district. In ...
...Περισσότερα